Winnipeg has a rich history of illegal and offensive parking lots.

There is, for example, the case of ‘Jelly Bean Park’ whereby a quaint little park on Portage Avenue was converted into a primitive gravel parking lot in a business deal involving convicted cocaine trafficker Ray Rybachuk prior to his mysterious death by snowmobile accident.

There is also of course the permanent temporary parking lot that the Friends of Upper Fort Garry will develop into an interpretive centre just as soon as they can get their hands on another $17 million.

Another illegal surface parking lot started blotting the Winnipeg landscape this summer. The parking lot is located off Pembina Highway behind Leila Pharmacy. Not as high-profile as the above examples perhaps, but still worth calling out because of the destruction of river-front green space, among other reasons.

The following excerpts of a letter from concerned neighbours are posted with permission from the Facebook page of David Watson, former blogger and past-president of Save Our Seine:

TO: RESIDENTS OF THE PORTS CONDOMINIUM
Some of you folks may have noticed that [LEILA PHARMACY -1686 Pembina Highway] the pharmacy next door decided to “extend” their parking lot to river’s edge (and beyond!). The owners completely removed the overburden (green space) and pushed much of it into the river. We contacted our condo board at The Ports, the City of Winnipeg, MB Department of Sustainable Development, MB Clean Environment Commission (chair) and the federal Department of Fisheries and Oceans. We have heard from all parties (except, oddly enough, from our own condo board) expressing concern over what the City of Winnipeg (Zoning and Permitting) has now confirmed is an illegal development in violation of both the city’s zoning by-law and, more importantly (because of its teeth) the city’s Waterways by-law.

In filing our initial complaint, we outlined a number of concerns/violations including: a) possible depreciation of condo property value for condo owners facing the parking lot; b) noise, health (from idling fumes near first and second floor condo windows) and security access issues; c) non-existent set-backs from property lines; d) lack of consultation with neighboring residents or commercial establishments; e) additional traffic; f) destruction of attractive green space and animal habitat; g) dumping of overburden into the Red River and; h) erecting a facility in violation of proper permitting and Waterways by-laws.

We have been informed that the city has spoken to the offending parties and has issued a registered letter informing them of the violation. They will await a response and in addition to a cease-and-desist order and possible court action the offending parties may face a fine of a yet undetermined amount.

Of greater import however are the consequences the offending parties may face in light of the city’s Waterways by-law. This by-law requires that all new construction developments in the city limit their footprint to a boundary at least 106.7m (350 feet) of the river’s edge. This parking lot extension is in clear violation of this by-law. An ultimate consequence of this violation – highly desirable in this instance – is that the city could force the offending party to completely restore the site to its original condition.

The Federal Department of Fisheries and Oceans are in investigating to determine if there is a violation of federal law by their act of dumping overburden and debris directly into a fish bearing watercourse. The province is assessing the same issue in terms of the impact of the dumping on water quality.

at least they left one tree standing 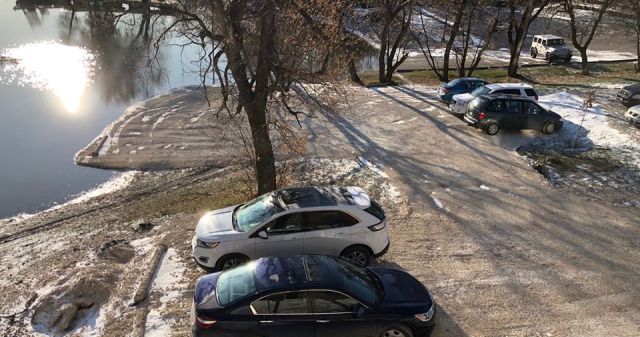 part of the new parking lot juts out into the river

This may not seem like a big deal, but it’s a slippery slope thing. If this guy can do it, the next guy can do it too. Our river-front green space is especially valuable, and not just from a visual standpoint — it provides a corridor for wildlife and the trees help to prevent erosion. (I also hold out hope that someday we’ll have a network of riverside trails across the city like Saskatoon or Edmonton, although that’s unlikely to ever happen.)

Aside from the Pony Corral next door, this stretch of river front was pretty much intact until now. Here’s hoping the owners of Leila Pharmacy get more than a slap on the wrist.

3 thoughts on “Another illegal parking lot”