1 million people. The universal “big city” benchmark. What does a city of 1 million look like? For me, images of skyscrapers, rapid transit, and dense downtown cores filled with office workers springs to mind. I see a vibrant night life, expensive parking, and clusters of suburbs springing up in the countryside. What will Winnipeg look like at 1 million people? CBC Manitoba is leading a conversation about the future of this fine city called Winnipeg at 1,000,000. I dropped into their studio the other morning with fellow pundits John Dobbin and James Hope Howard  to talk a bit about it, but here are the first of some more extensive thoughts:

30  years from now, when the chemically preserved disembodied head of Premier Axworthy looks down upon the city from his perch in the dome of the Legislative Building, what he will see is a city much like it is today. The downtown skyline will be a little different, the city will be significantly larger, but the rest of the established areas of the city will be largely unchanged.

I say this for a few reasons:

A good financial advisor will tell you that past performance is not necessarily an indicator of future results, but in this case it probably is because our development to this point is a consequence of decisions made that reflect our priorities as a community.

2) There is an increasing belief among people in existing neighbourhoods that they have some sort of veto power over new developments in their area. If a developer wants to build a new condo tower, apartment building or manufacturing business in an established area, they run into a wall of opposition from local residents. They have to battle through this opposition in the various zoning and appeals processes, and often the proposal ends up getting denied, or if it is approved it may be at a smaller scale than was originally planned to appease the squawking neighbours.

We have seen numerous examples of this, and each time it happens it empowers the next group of vocal neighbourhood NIMBYs to fight the next development that threatens to impact their enclave in some small way. 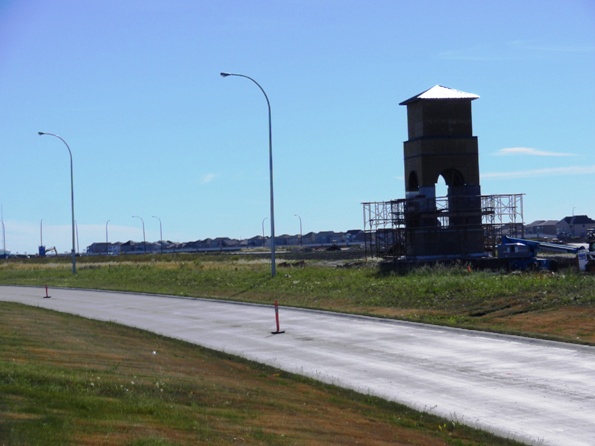 3) New infrastructure is already being planned and built that will encourage more sprawl, and thereby discourage development of existing areas.

Example: Winnipeg’s long term transportation plan sees William R. Clement Parkway (would “Clement Street” have been such a bad name?) in west Winnipeg connect with Bishop Grandin Blvd in the south by swooping through undeveloped land southwest of the city. This new road is ostensibly to support future traffic to and from a successful Centreport development (according to a city guy I talked to at an open house), but in reality it will facilitate more low density developments on the periphery of the city.

4) The mythical Transit Oriented Development will fail to materialize, as mythical things often do. I shouldn’t call it mythical because I have seen it elsewhere, but much like the narwhal and the platypus, you will not see it here except in pictures.

Why do I say this? Because rapid transit will fail to materialize. We have been talking about it for decades and have only mustered up 4 km of dedicated roadway for the least rapid version of rapid transit that exists. Building a functional and successful RT network requires a dedicated commitment to it. Endless talk and piecemeal funding will not produce results.

Unfortunately both the City of Winnipeg and the Province of Manitoba are becoming increasingly mired in financial bogs that will make funding expensive projects very difficult. The city has a growing infrastructure deficit that challenges our ability to repair and replace what we have now, leaving only scraps of funding for “nice to have” projects. The province’s debt is ballooning, and despite what the budget forecast says, there is no end in sight. Getting both levels of government committed to funding the envisioned rapid transit network will be nigh impossible, given these realities.

This are my opening pessimistic thoughts. I do have positive thoughts as well, because there are indeed some encouraging signs and some areas of great potential, but I will leave those for Part 2. I need to give those positive thoughts some time to stew around in my brain until they dissolve down into something coherent.