I once had a conversation with a person from an obscure political party who’s platform involved holding a referendum on every major economic or policy decision. “What could be more democratic than that?” he asked. Nothing, I suppose, but the point of a democracy isn’t to put every individual decision in the hands of the electorate. We elect leaders to lead, and leading involves making decisions. Governments are staffed with smart and educated professionals (I hope) who perform research and analysis to help the leaders make informed and wise decisions. This is how democracy works best: by electing people to govern, and holding them accountable to that task in the following election.

Occasionally we get a glimpse of what life might be like if governing happened via referendum. In 1992 the country was asked to vote on the Charlottetown Accord — a document that not only determined Quebec’s participation in the Canadian constitution but included plans for senate reform, the easing of inter-provincial trade restrictions, and numerous other tweaks to the mechanisms of the provincial and federal governments. Despite the agreement of all the provinces to the conditions of the Accord, the final decision was left to the electorate. The people rejected it.

Here’s what I remember about that referendum: flyers. Lots of flyers. Interest groups on both sides littered mail boxes with their own biased view of the Accord.

Did people understand the Accord? Most people knew what it was about in a very general sense, but very few people had a genuine understanding of the terms and implications of the document. As a result, people voted based on the propaganda that arrived in the mailbox. This exercise in democracy put power in the hands of interest groups, not individuals.

Therefore, I am not a fan of the legislation that former Manitoba Premier Gary Filmon put in place to require a referendum prior to implementing a tax increase. How many people would willingly vote to have more money picked from their pockets? Referendums are a cop out for the governing party, and legislation requiring them are nothing more than a political game.

Does this mean that Selinger was justified in ignoring the PST referendum legislation? No. Wise or not, the legislation was in place. The government was elected in part on I) the promise that they wouldn’t increase the PST, and II) the assumption that if such a move were made, it would only be made if the public approved of it first in a referendum. The honourable thing to do would have been to either comply with it, or repeal it prior to increasing taxes. Simply ignoring the legislation amplified the dishonesty of Greg Selinger and the NDP government.

Does this mean that leadership challenger Steve Ashton is right to reinstate the referendum if he should replace Selinger as the Premier? Once again, no. There is no longer any point. We now know that the government, including Ashton himself, believes the PST increase is both necessary and the best course of action for the province. The only reason to put the question back to the public at this stage would be to divest the government of responsibility for managing the economic affairs of province.

Pundit Deveryn Ross argued recently in the Free Press that Ashton’s flip flop on the referendum “is a solid political strategy that has the potential to lift the NDP from its polling doldrums”. True, it may have strategic benefit, but it is a cowardly act that is unbecoming of a leader.

So, to summarize: Gary Filmon was wrong to implement the PST referendum requirement, Greg Selinger was wrong to completely disregard it, and Ashton would be wrong to reinstate it. I’ll add that Brian Pallister was wrong to challenge it in court, because it was obvious that he was going to lose.

There is a place for referendums in a democratic system to ensure that social policies reflect the views of the majority of the citizens, but they should be used sparingly and reserved only for matters of little direct economic consequence. The PST referendum policy was ill-advised to begin with, and it’s still a bad policy. Whoever happens to be Premier in three months should show some integrity by standing by their decision to raise taxes and let the people of Manitoba judge them for it in 2016. 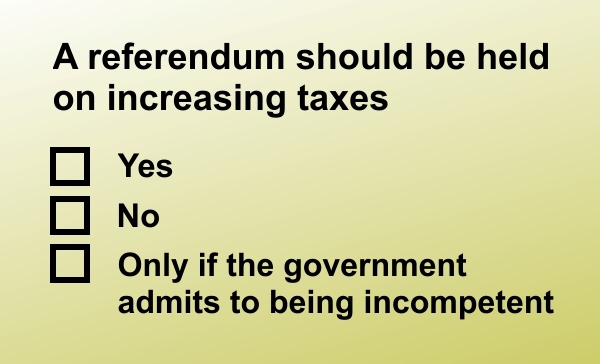