On September 24, MPI issued a warning that 2019 was trending towards a new record for pedestrian fatalities in Manitoba in a single year.

For every fatality there are on average over 13 injuries, according to MPI’s data. A week ago, two more pedestrians were hit by a driver and sent to the hospital in unstable condition. Aside from the cold, hard numbers, it feels like the streets are becoming more dangerous for those who are not surrounded by sheet metal.

There are a number of potential solutions to reduce or, if you’re a Vision Zero advocate, eliminate pedestrian fatalities. These include stiffer penalties for distracted driving, improved infrastructure to protect pedestrians and cyclists, and reducing speed limits. That last one is the primary focus of a group called Safe Speeds WPG.

Reducing the speed limit in residential areas is probably a good idea. I am generally supportive, although I have some concerns: How will the speed change be implemented? What streets will be exempted and how will that process work? Will exempting streets create confusion due to a lack of consistency? What will the costs be to implement this with new signage, awareness campaigns and alike? Lastly, can we count on the City to be responsible and not use this as an opportunity to load its piggy bank by reducing speeds on streets where it is not appropriate and setting up speed traps primarily in those areas? You may scoff at this “cash grab” argument but I can list several instances where speed enforcement was not related at all to safety, and when that occurs it creates cynicism and undermines the integrity of the system. It’s something that needs to be addressed.

None of these things are insurmountable. Other cities are reducing speed limits and we can learn about how they handled these challenges and what the outcome was.

With that in mind, I stopped by a town hall organized by Safe Speeds WPG last Thursday (sacrificing half a Jets game of TV-watching in the process!) I hoped to learn about this group and what they’re doing, how they’re planning on increasing buy-in and perhaps initiate some discussion about the challenges they might face.

It started off well with a couple of very thoughtful presentations explaining the benefits of lower speeds. The presentations included the familiar S-curve diagram showing the non-linear relationship between speed and fatalities ..

.. and a slightly more gruesome version of the same concept ..

I know there must be a study somewhere that the people who make these charts are using as a source, but by MPI’s own numbers only 7% of collisions with pedestrians result in fatalities with speed limits as they are currently. Nevertheless, slower speeds are unquestionably safer in residential areas. Other good points were made including that it’s about more than injuries and death — it’s also about respect and allowing people to feel comfortable in their communities.

In the second half of the meeting we were divided up into five groups to brainstorm concepts around safe speeds. What is good about slower speeds? What’s bad about it? Put your thoughts on sticky notes and post them on the board, and we can discuss our findings. This was our opportunity to have some meaningful discussion about the challenges and potential drawbacks of reducing speed limits.

I left disappointed. The exercise turned out to be more one of affirmation. Are reduced speed limits good? YES! Is there any reason not to do it? NO! Alright we’re in agreement. Call your Councillor and tell them to do it.

Part of the issue was lack of diversity. Not only was I the only person from the suburbs in my particular breakout group, I was the only person not from Wolseley. The event, which was held in Wolseley, was very heavy on participants from that area and the core area generally. One person even asked me in a somewhat accusing tone “why are you here?” I’m no stranger to standing out from the crowd — I was the only person in Southdale with a Vote Open sign on my lawn — but I came here with good intentions and left feeling like a spy.

In the post-it note exercise I wrote some of the concerns that I expressed above, because I knew that virtually everyone else would write only positive things and I wanted to prompt some discussion. Those concerns were only reluctantly and briefly acknowledged and then dismissed with a literal wave of the hand. They were not worthy of discussion.

This might ultimately be the downfall of Safe Speeds WPG’s efforts. It’s no surprise that they are all in agreement, as that’s how advocacy groups are created. However, as they move forward with their campaign they may find that a map of people who support lower speed limits looks something like this: 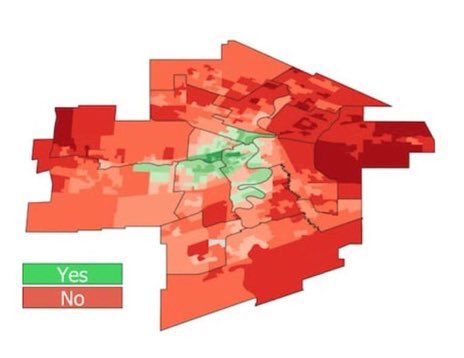 If Safe Speeds WPG is going to succeed in their mission, somehow they will need to learn to open their minds to other perspectives even if they disagree with them. We all want a safe and livable city. We need to work together to get there.